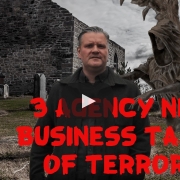 Welcome to 3 Agency New Business Tales of Terror II, our second horrifying Halloween episode of “3 Takeaways”, our agency new business video series where we focus on one new business category and give you three takeaways to help improve your new business program.

I’m your host on this dreaded tour, Lee McKnight Jr, VP of Sales at RSW/US.

And today-I’ll be telling you 3 different tales of agency new business terror.

The first terrible tale is called: Trapped Under Ice

A true tale from one of our new business directors, or NBD’s, that occurred a few years ago.

This NBD got her agency client invited to a Best Buy RFP. Heady days.  Well the first step was a conference call scheduled with a Marketing Director we’ll call Liz.

This introductory call was scheduled for 10:30 on a Tuesday, and customary to our process, our NBD called Liz on behalf of her agency client the day before to confirm the conference call, got voicemail, which is not unusual, and left a message.

As a precaution, the NBD backed up the voicemail message with an email the morning of the call, essentially saying, “just in case you don’t pick up voicemail before we are scheduled to talk, just wanted to confirm the plans for our conference call at 10:30 this morning.”

Right after hitting “send” an auto-reply came back from Liz saying she was out of the office unexpectedly due to illness.

Obviously, next step would be rescheduling the call.

But then Liz at Best Buy went cold-icy cold.  And our NBD felt trapped-that’s right, like she was trapped-under ice.

Well, our NBD did reach Liz later in the week, and when asked about rescheduling, got a frosty reply: “No thanks.  It will not be necessary.”

What happened? Liz had been pretty enthusiastic before.

Here’s the sordid tale: the morning of the call, our NBD’s agency client, emailed their presentation to Liz, so she would have it in her hands during the call.

This was, apparently, a “standard” capabilities presentation.

Standard, except that they occasionally modify or customize it for specific audiences and presentations.

As is typical in the agency world, the morning our client emailed the presentation to Liz, it was hectic, to say the least.  You’ve been there-every day.

But their fatal mistake is your first takeaway: Always take the time to review anything you send to a prospective client.

Because they didn’t.  Think it can never happen to you? It happens all the time.

It turned out the file they sent contained information that had been customized for another company they had been pitching earlier.

It didn’t help that there were spelling errors and sensitive information relating to the company that had received the presentation before Best Buy.

Everybody’s busy and even with careful proofreading, a mistake can slip through.  But at the very least, you have to take the time to proofread it at least once.

OK, now for the second seething story, and it’s called: The Beast Within

This one is short and sweet, but hammers home a valuable point.

Coming again from our own internal new business director vaults, this NBD got a first meeting for his agency client that was high on the list of priorities.

It went exceedingly well, and looked promising for an initial project. And then-nothing-radio silence.

This is a tale older than the hills, but, our client was typically excellent at follow-up, and her RSW NBD helped in the process as well, part of what we do.

However, as good as this client was at follow up, one week, two week and three weeks pass, still with nothing.

We ensured the follow up was value-driven and not overly persistent, nevertheless, nothing happened.

And our client, so typically sure of herself, began to doubt her prowess.

That voice within began to gnaw at her, slowly becoming a beast that filled her with even more doubt and anxiety as the weeks went by: had she done something wrong, had she missed something?

That beast within began to slowly eat away at her confidence. BUT-she carried on-and at week 4, the prospect comes back, all apologies-there had been a family emergency.

They got the project.

Granted, it doesn’t always end this way, but it’s an important lesson, and your second takeaway:

If you’ve established success, don’t doubt yourself when a prospect goes dark.

Stick to your proven methodology.

And that doesn’t mean you don’t try and improve and that prospect may stay dark, oh, it happens (as you know).

But typically your prospects are just insanely busy-they actually want meaningful follow up.

Here’s a stat from our own reports to back that up: 53% of Marketers say agencies are NOT sufficiently aggressive in following up after a meeting. So stick with it.

OK, our third and last terrifying tale: The Sickening Self-Sabotage of the New Business Director

This comes from an agency prospect I spoke with, describing a new business hire that unfortunately, didn’t work out.

At first, all was good-this individual was getting initial meetings with right-fit prospects, and he was in charge of taking those initial meetings solo, and carrying them through to a next step with the team.

However, after several months, it became evident that the first meetings, meetings that seemed promising, were going nowhere.

When the agency owner asked why, the answers were essentially, “I don’t really know, these first meetings are going well”.

After a few more of the same, the partner decided to take some action and asked to be in the next initial prospect meeting.

What the partner heard revealed a case of sickening self-sabotage.  Here are some key highlights from the call:

When the prospect asks the new business director – “tell me a little about the agency”-the first thing he says is: Well, this doesn’t make us unique but I think it’s important for you to know….”  And then follows with, “another thing about us is X, although a lot of agencies can say that…”.  He continues, and in fact, once the prospect actually responded ‘’Yeah, you’re right.  Almost all the agencies we talk to say that very same thing” with the new business director apparently not catching on that she meant it as a negative.

So your third and last takeaway is this-Yes you all do the same things, but own what YOU do.

Thanks for watching 3 Agency New Business Tales of Terror II, this very special second annual Halloween episode of 3 Takeaways-lots of new business content on our resources page at the URL below, and visit rswus.com if you’re interested in our new business programs. 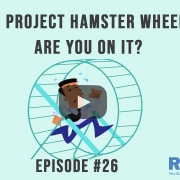 The Project Hamster Wheel – Are You On It?-3 Takeaways Ep 26 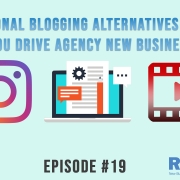 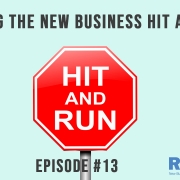 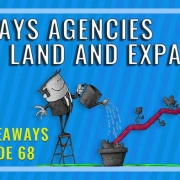 3 Ways Agencies Can Land And Expand 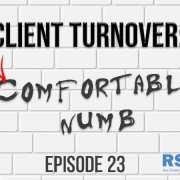 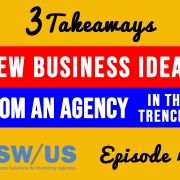 Your Key New Business Takeaway From The Disappearing CMO Phenomenon