Brad Jakeman, the President of Pepsi’s Global Beverage Group, had a pretty tough message to send to the 2,700 attendees at this year’s ANA Masters of Marketing Conference:

Jakeman, in an impassioned speech given on Thursday at the event, suggested that agencies have not kept pace with the changes that have occurred all around them – both in terms of what they aren’t doing to deliver the goods for their marketing clients and in terms of how they are staffed.

According to Jakeman, “I’m sick and tired of sitting in agency meetings with a bunch of straight white males talking to me about selling my brand, when 85% of my brand is purchased by women!”

Jakeman talked about the global agency network model and how he believes it is a “dinosaur concept”, suggesting he is worried that the model will break if the industry really doesn’t think about how to innovate. 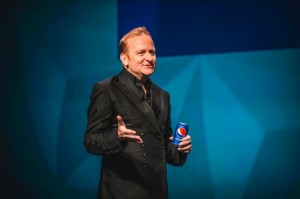 I had two separate conversations with CMOs at the ANA event, and each indicated their relationships with big networked agencies (that they inherited as they walked into their new positions) were more problematic than productive.

Words like “inertia”, “drama”, “lack of innovation” were echoed by both CMOs when describing the lack of value they felt they were getting from their big global shops.

This reinforces what we hear from marketers at large through our industry surveys.

More marketers are choosing to select specialist agencies that aren’t tied to big networks, or are selecting full service firms that are independent in their thinking and their affiliation.

Marketers initiate searches because they feel their current agency relationships are tired; they feel like they aren’t getting the same intelligent thinking, innovation, and strategic leadership they had when the relationship was first formed.

Interestingly, of the dozen or so conversations I had over the course of just one day, most marketers expressed an interest in improving their position in the digital and social space – feeling like their current agency isn’t keeping pace and feeling like they themselves, needed to get a better handle on how their brand was presenting itself to the market.

Jakeman from Pepsi suggested much of the same as he scolded the industry for not taking more ownership of the work they’re pushing out into the market and the relationships they establish with their agencies.

And as it relates to the term “advertising”, Jakeman said: “Can we stop using the term advertising, which is based on this model of polluting (the market with content)”.

The industry sure is changing.

Is your agency keeping pace?

Does Anybody Care About Your Ad Agency?

The Ad Agency of the Future: Predictions from PepsiCo, Procter & Gamble, Publicis and More

If Agency New Business was an Onion…