And a release that accompanied it: 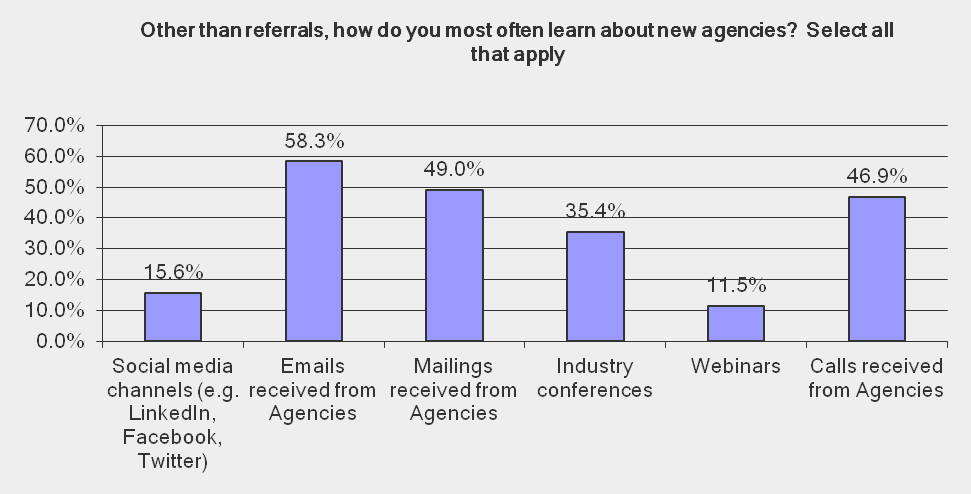 According to Mark Sneider, Owner/President of RSW/US, “We suspect what makes it tougher to break through is Agencies are either only using one platform (like social) or they’re stopping and starting, not trying hard enough to find their way into the Marketer’s world.”  Sneider continues, “Having a well integrated program that is consistent in its messaging is what’s most critical.  You never know what a Marketer is going to be most receptive to, so you need to connect on as many platforms as possible.”

We preach it often, you shouldn’t ever just rely on one channel to break through to prospects.

Another angle to consider as well: undoubtedly there are those agencies who could counter this with evidence that they do in fact solely rely on social as their most successful new business channel.

The Thing That Should Not Be

Fair enough, but looking at the replies from the 101 Marketing executives who responded to our survey, it’s obvious social isn’t much of a new business driver at all, and that shouldn’t be.

There is no reason social should account for only 15% as a way that marketers hear about agencies.

4 reasons why we think the percentage is so low:

2)      In certain verticals, prospects still aren’t using social heavily-they’re not there (yet)

To be blunt, agencies-when it comes to social:

Focus on one or two platforms, we recommend Twitter and/or LinkedIn, put together an editorial calendar, assign social duties to a certain person or people, make sure you’re following your prospects, and finally, as others wiser than I have said, don’t do social, be social-interact with your prospects wherever possible.

There’s no reason social can’t be higher than a paltry 15% when it comes to marketer awareness of your agency.

(Something else that might be helpful, and I don’t meant this to come as a shill, but the third webinar in our 2012 series (on 9/13/12) touched on those agencies we’ve found are doing an effective job-you can view it here: Maximizing Digital/Social Value In New Business.)