I admire our New Business Directors.

It is one of the toughest jobs on the planet.

Skin as tough as steel.

Able to wear their Agencies on their sleeves and sell ethereal agency offerings with enthusiasm and zeal.

Focus On The Close

It was about 3-4 years ago (we are now in Year 7) that I realized that no matter how good our people were, at the end of the day it didn’t matter how good a meeting was, what really mattered in the grand scheme of things was whether or not the client closed business.

Actually the real realization was that in general, agency folk aren’t all that great at taking meetings and putting on the sales hat and moving things to close.

They get all excited leading up to meetings, they get pumped when they’re in meetings, and they are jazzed coming out of meetings.

But when things don’t move at their pace, they lose interest, become frustrated, and/or get mad.

Moving a meeting past the meeting and guiding it to close is the Second Hardest Part about Agency New Business.

Moving a meeting past the meeting is the time when Agency principals need to put on their Sales hat and think sales strategy and figure out how to keep the momentum moving that comes out of the meeting and carry it to the deal. 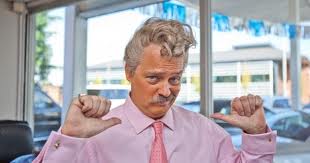 In our past RSW/US surveys Marketers tell us that Agency principals are neither bad or good at follow-up, suggesting that there’s room to dial it up.

1. Say “thank you”
2. Create reasons to connect
3. Add value and bring insights to the table
4. Be persistent, but polite…1-2 follow-up calls in 2-3 weeks time isn’t enough
5. Try and set that follow-up meeting during your first meeting
6. ASAP – even if the prospect isn’t in a hurry…respond quickly to keep the MOJO moving
7. Don’t get discouraged.  if they don’t respond try the “I don’t want to keep bugging you” message

Bottom line…is you want them more than they want you.  So give them reason to want you.

Don’t give up (too easily).

Double it and go with that (e.g. instead of 2 calls over a month, call them 4 times).  Stay positive…your bad feelings will show through if you don’t keep them in check.

An RSW/US Client Win For a Midwest Full-Service Agency

Your Director of Business Development: Seeker, Closer or Both?