I have carried an Ad Age article (dated July 31, 1995-When to Take My Name Off the Door) around with me since the day it was released, posting it on the various walls of marketing and marketing service companies I have worked for.

It currently sits on the wall of my office at RSW/US as a reminder to always add value in everything I (we) do as an individual/as a company.

The article reprints the speech given by Leo Burnett on December 1, 1967 to his employees.

It was in essence, his farewell speech.

The speech was titled “When to Take My Name off the Door”.

I thought Leo’s perspective might be of value to you as attempt to keep your focus throughout this year. 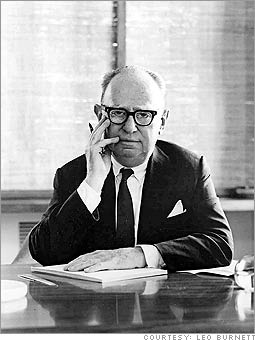 That will be the day when you spend more time trying to make money and less time making advertising – our kind of advertising.

When you forget that the sheer fun of ad-making and the lift you get out of it – the creative climate of the place – should be as important as money to the very special breed of writers and artists and business professionals who compose this company of ours and make it tick.

When you lose that restless feeling that nothing you do is ever quite good enough.

When you lose your itch to do the job well for its own sake – regardless of the client, or the money or the effort it takes.

When you lose your passion for thoroughness… your hatred of loose ends.

When you stop reaching for the manner, the overtone, the marriage of words and pictures that produces the fresh, the memorable and the believable effect.

When you stop rededicating yourselves every day to the idea that better advertising is what the Leo Burnett Company is all about.

When you are no longer what Thoreau called a “corporation with a conscience” which means to me, a corporation of conscientious men and women.

When you begin to compromise your integrity — which has always been the heart’s blood – the very guts of this agency.

When you stoop to convenient expedience and rationalize yourselves into acts of opportunism – for the sake of a fast buck.

When you show the slightest sign of crudeness, inappropriateness or smart-aleckness – and you lose that subtle sense of the fitness of things.

When your main interest becomes a matter of size just to be big – rather than good, hard wonderful work.

When your outlook narrows down to the number of windows – from zero to five in the walls of your office, but think of yourself first.

When you lose your humility and become big-shot weisenheimers… a little too big for your boots.
When the apples come down to being just apples for eating (or for polishing) – no longer a part of our tone – our personality.

When you disapprove of something, and start tearing the hell out of the man who did it rather than the work itself?

When you stop building on strong and vital ideas, and start a routine production line.

When you start believing that, in the interest of efficiency, a creative spirit and the urge to create can be delegated and administered, and forget that they can only be nurtured, stimulated and inspired.

When you start giving lip service to this being a “creative agency” and stop really being one.

Finally, when you lose your respect for the lonely man – the man at his typewriter or his drawing board or behind his camera or just scribbling notes with one of our big black pencils – or working all night on a media plan. When you forget that the lonely man – and thank God for him – has made the agency we now have possible. When you forget he’s the man who, because he is reaching harder, sometimes actually gets hold of – for a moment – one of those hot, unreachable stars.

THAT, boys and girls, is when I shall insist you take my name off the door.

And by golly, it will be taken off the door.

Everyone Is Calling Your Prospects, And Not Just Your Competitors
Scroll to top